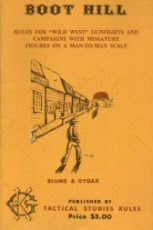 Boot Hill (though Blue Planet was also a strong contender).
The original Boot Hill, another small booklet that later became a boxed set, was closer to the concept of a miniatures wargame of opponents in conflict, as opposed to the D&D dungeon meme of players fighting through an obstacle course/target range. Heck, the rule set described itseslf as "Rules for "Wild West" Gunfights And Campaigns with Miniature Figures in a Man-to-Man Scale". You don't get more truth in advertising than this.
This was much more PVP than PVE. It is an artifact of the time when the dynamic in hobby games was changing – moving from games played by relatively equal sides opposing each other and moving to the fully moderated mode of modern roleplaying. It would be continued and expanded to a modest boxed set and eventually to a softbound book.
My first project as an employee of TSR was for Boot Hill - taking a town designed by Allen Hammack and a wilderness encounter chart created by Brian Blume and melding them together into what became "Burned Bush Wells".  Boot Hill was a cool game, but it never shook the nature of its "harder wargame" origin. Its stats were directed, not necessarily to the idea of living in an ongoing campaign, but rather for fighting a gunfight. Which worked if you were statting out Billy the Kid, but ended up in practice with every soiled dove and toddler packing SOME kind of heat.
More later,
Posted by Jeff_Grubb at 8:34 AM