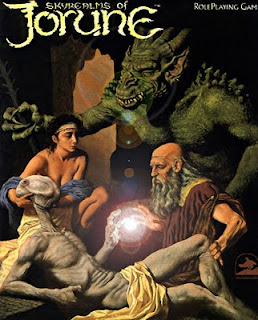 OK, officially, it is Skyrealms of Jorune, but I have too many games in the S category.

This is a game I should love. Alien world where high-tech humans invade and then are cut off from their home planet. Lost technology. Alien races. Good art. Sounds like Empire of the Petal Throne, right?

Well, wrong. It leaves me cold. The game system is nuanced to the point of opacity. There is a lot of white space and beautiful full page B/W art that is repeated through the books and makes it feel lighter and less effective than it really is. But where the game fails to reach out for me is the overuse of world-specific terms, dumping a huge data load onto you and expecting you to dig your way out.

The game writing renames a lot of gaming terms with in-world terms. Your GM is a Sholari. Your player is a Tauther who is applying for Drennship (Citizenship). It is actually a case where the names get in the way of explaining the game world. Plus they use terminology in the definitions of other terminology, which does not help. An entry for the players, sorry, Tauther, defines the Pibber is “Furry and forgettable, except when thisting”. But the definition of thisting in another booklet is: “Pibbers [do?] this when in danger”.

Well, that makes everything clear.

It is actually a good example of where names work and where they don’t in worldbuilding. Defining something by a name that in turn requires a definition strains the patience of the reader, and an overload of such terms becomes a wall. Working it into the text on the assumption that the reader will eventually “get it” through context creates the problem that many will not, and lessons supposedly learned early in the text reduces comprehension further deeper in.

In the end, though, EPT succeeds were Jorune does not in that the final world of Tekumel is first and foremost of world of adventure. EPT definitely has its ancestors in among the pulp worlds of Barsoom and Clark Ashton Smith. Jorune feels drier, almost bloodless and never seems to settle if it is motivated by action or investigation, nor how much the PCs truly know about their world.

This one always makes me feel a little regret. It feels close to the mark, but just misses. Great art, though.