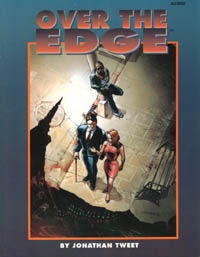 Imagine, if you will that the ur-text of FRPGs is not Tolkien's Lord of the Rings but instead is The Naked Lunch by William S. Burroughs. Instead of the traditional multi-racial quest tale sprung out of European folklore you instead get a swirling mass of free association, rival agendas, conspiracies and general philosophical debauchery. That's what you have here.

Over the Edge feels like two parts experiment and two parts gaming manifesto. It has a lot of cool bits and mechanics (particularly for its publishing age) and how they are intended to use them, presented in an accessible, almost conversational format. My favorite is a small one - if you do the same thing round after round in combat, your chances of success diminish. This strongly reduces the "I hit him with my sword" repetition nature of most combat and breathes life into what is otherwise (and oddly) one of the most sterile mechanics in the game.

But the bulk of the book is a presentation of the island of Al Amarja, off the coast of North Africa - you can see Albert Camus' house from there. It is Bill Burrough's Interzone turned into Waterdeep, a gumbo of factions, counterfactions, revolutionaries, counterrevolutionaries, agents, double agents, and triple agents, all with a healthy admixture of aliens, mutants, demons, drugs, mind-controllers, and a quasi-fascist government (who, among other things, have their own "Language Police" who are heavily armed).

The game is worth playing, if only to see how it unspools with dedicated players. The book itself is worth consuming, and it is of a class of RPG product that is meant to be read and enjoyed as work itself as much as translated onto the gaming table.