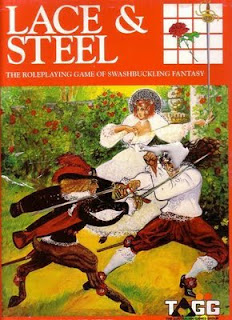 Lace and Steel.
Oh, what a great game. Swashbuckling and High Court! Satyrs, harpies and centaurs as PC races! Donna Barr! Totally unwieldy box! Australian designer!  Combat resolved by card play!
OK, let me take a deep breath and get started again.
Lace and Steel is probably the best RPG I’ve never played. Even looking at it, sitting on the shelf next to a later reprint, makes me smile. It is oversized, a white destructo box in a paper sleeve, horribly impractical for just about every market I can think of from Bill & Walt’s Hobby Store to Border’s. It has four funny-sized books with black and white illos, all by the same artist. It has a card-based resolution system. Actually, several card-based resolution systems. Yet is an ugly duckling that turns out to be a swan.
It is swashbuckling roleplaying in a 17th century fantasy world. But it is not a typical fantasy world given guns. Instead it is the Donner Three Musketeers transplanted into fantasy terms. Elves and dwarves, no, but rather harpies and centaurs, with a blissful disregard for how the logistics and play balance would work.
It uses dice for its skill system, dice and tarot cards for its character generation, a different set of  cards for sword dueling (and biting repartee at parties) and a COMPLETELY DIFFERENT set of cards for magical combat. The universal game system, the holy grail of most of 80’s design? It was pretty much the opposite of that. And it is joyful and delightful in its driving for the far end of the field.
The art is by the indominable Donna Barr, and is her trademarkable loopy, dynamic, detailed pen and ink. It’s a style that doesn’t normally work for me but it works here perfectly. Her command of character and action is perfect for the style and the world. She can handle a quiet seduction and full-scale military battle with equal aplomb. I can’t imagine it being any other way.
The art style is lusty and busty, and the world presented has an earthy knowingness that evokes those parts of the Forgotten Realms we normally keep under wraps. When your main character races include centaurs and satyrs, the whole question of romance and seduction comes up with amazing regularity. Plus the fact that Dumas’ original had a, shall we say, continental attitude often missing from fantasies bred in more scholarly settings. The end result is more of the feel that En Garde wanted but couldn’t pull off.
It remains a novelty, a side path not taken by the industry. Perhaps because of genre, perhaps because it went in too many ways at once. And perhaps because simply at the time, it required using card in a roleplaying game. And who could afford to make playing card quality cards in that age?
More later,
Posted by Jeff_Grubb at 10:25 AM