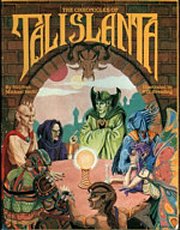 I know Talislanta first and foremost as a world, not a game system. It came into my life with The Chronicles of Talislanta, and as a collection of squarebound books known as the Cyclopedia Talislanta (not to be confused the Cyclopedia Harnica).

These volumes, collectively unified by the incredible art of P.D.Breeding, created a very different world than either the traditional D&D-crafted universes or the more medieval creations of C&S or Harn. Talislanta's world is set in a culturally and genetically diverse realm with non-standard races. As the ad copy said - "No Elves", at a time when Elves were part and parcel of what fantasy was.

Talislanta, more importantly, had no humans. Or rather, no race that one could point at as a human analogue. Each nation had its own divergent culture, some working with its neighbors, some warring against them. And while you could create a spectrum with the Arimites and the Mandalans at the more human end, and the bestial Mogroth and the scale-plated Vajra at the other, there is no "typical" universal human race that is everywhere. Skin hues move through blue and green, we have scales, feathers, and rainbow tattoos. There is no dominant culture, and while you can say that this race is "Asian fantasy" and that race is "Melnibonean" or "Drowish" in apparent origin, there is precious little that you put down as default. In modern SF terms, it is less like the bridge of the original Enterprise and more like Quark's Bar - a place where bipedal, laterally symmetrical races thrive.

Vance gets invoked when talking about Talislanta, but I would also add Edgar Rice Burroughs, in particular Tarzan and John Carter of Mars. The latter in particular was a world filled with a huge number of different diverse peoples that had their own cultures apart from one another. The "Lost World" trope of racially distinct tribes comes down to us through a number of sources, and is going great guns in Talistanta.

The fantasy itself was tuned up a few notches as well. We have traders in dream essence and ice schooners and dune ships. It evokes a lot of old Yes covers by Roger Dean. It delighted in its off-beat strangeness, or the fact that it was a world that snubbed grandfather Tolkien and the western traditional fantasy to find its own path.

I found the rules for the original game later, but they seemed unnecessary for the core of the world, which was the diversity and interaction of the races. I will admit that I have a particular fondness for the WotC edition as far as codifying and putting everything together, but the play experience was not what I got out of the game. Rather, it was the fantasy world itself, and the reading experience of Talistanta that was its own reward.

More later
Posted by Jeff_Grubb at 8:22 AM