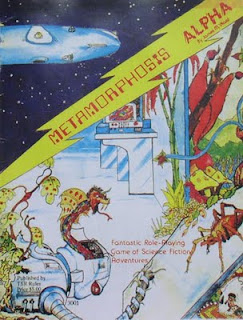 Not Marvel Super Heroes or Mekton or Mouse Guard or Mutants & Masterminds or Mechanoid Invasion or Mage: The Ascension or Metaverse or even Macho Women with Guns but for …

Metamorphosis Alpha, that great predecessor to Gamma World and one of the handful of "foundation RPGs".
As far as I can determine (and I would delight at an earlier sighting), this came is the first RPG product to call itself a Role-Playing Game on the cover (as opposed to, say, a fantasy game of miniatures combat or a miniatures game of fantasy combat or whatever). It was also the first SF Campaign Setting, depending on your definition of SF (you could argue that EPT was SF given its futuristic origins, or that MA was not SF because radiation causes you to have superpowers, as opposed to killing you). It was an early self-contained setting, constraining itself to the many levels of the Warden, a starship where something has gone horribly, horribly wrong.
The game part of it is a direct D&D descendant, but casts aside the traditional statistics for ones that are applicable for the campaign, like Radiation Resistance and Leadership. Also add a horde of mutations and a heaping helping of technology, plus overall maps of the levels of the Warden. All in 32 tightly-packed pages.
This is one of those foundation RPGs, that you can track others back to. It is a great early example not only of RPGs, but what you can DO with an RPG. It had all the lethality of early RPGs,but with it an expectation that your character might be around for the next session. And it stresses the idea that you can have a campaign without having to design an entire world, and that campaign design is a valid and worthwhile component of RPG play.


And it is proof positive that James Ward is one of the leading lights of early RPGs.
Posted by Jeff_Grubb at 3:37 PM