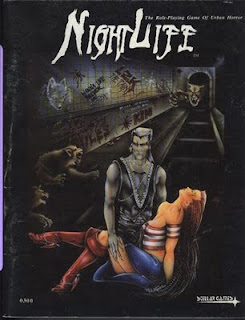 Here's a game where you play monsters but you have to keep your humanity. You can play any of a number of diverse, nigh-immortal "Kin" in a modern urban setting who prey on the "herd" and engage in their own inter-group politics. You have a large number of superpowers but also compulsions and feeding habits that force you to create your own subculture. You hang out at night clubs. Your world is one of darkness.

Oddly enough, I am NOT talking about Vampire: the Masquerade, which showed up a year after Nightlife hit the streets and bodychecked it into the boards like an SUV driving a SMART car off the road. Nightlife feels closer to the games of the 80s, and is pretty much what VTM would have been if it had followed a more traditional route.

The game itself is ability and skill-based, with your breed of kin determining your early super-powers (sorry, edges). Vampyres (with a Y), Werewolves, Ghosts, Daemons, Wyghts (also with a Y), Inuits (so we get that West Coast vibe) and Animates (Frankenstien). Yeah, that seems like the marketing plan for White Wolf, but it is also the casting call for horror movies from the 1950s on. Both games are mining the same rich vein of lore, out on the old Annie Rice claim. But VTM was taking drama classes while Nightlife was watching a lot more cheezey movies on USA Up All Night.

Yet for declaring itself a horror game, in fact dedicating itself to splatterpunk, the game is relatively bloodless. Save for a couple paragraphs on how deep the knife sticks in and mild-R-rated art that flirts with the borders (all but now erased) of good taste, its mechanics are as tame as regular D&D, and that puts a wall between the player and the horror. The opponents are reduced to a bag of hit points to remove, the powers to a group of toggles to throw. Mind you, this is pure D&D adventuring from the old school, where the color and the gore is brought to the table by the DM and imagined in the minds of the players. But its more detailed mechanics put it at a disadvantage to the more visceral and dramatic (though lest precise) mechanics of its World of Darkness follower.

In the end, the game stayed true to its roots, doing a musical version that would make the Vampire Lestdt happy, and a couple post-apocalyptic expansions that felt like Gamma World as presented by Troma films. If an Old School Revival hits the Vampires (and it is only a matter of time), then this is one of the foundation stones they should look at for how they got where they are.