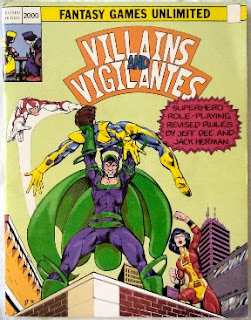 V&V is one of those "Ampersand and Alliteration" games of the early RPG era - Tunnels and Trolls, Bunnies and Burrows, Powers and Perils. On a list of game titles, it tells you right off the bat from whence it takes its gaming DNA. V&V was an early super hero RPG where you had a wide variety of powers culled from the comics.

And I love this game, if for nothing else a single super-power -

It could be also Control Mollusk or Command Mollusk (I don't have the books at hand), but that one little grace note to fit in with Animal Control and Fish Control is just one of the things about the game that makes me smile, and sets the game up as a more light-hearted and adventure-oriented of the early super-hero games.

There were two big guns back in those pre-MSH days - V&V and Champions. Champions was very much about defining superheroics - their min/maxed character points put a lot more emphasis on character creation and tweaking it to just right. V&V was much more swingy - you could "play yourself" if you so chose (converting you into a baseline hero) and then adding super powers. Random super powers. You were given a bag of stuff, and challenged to come up with your own superhero as you emerge from the irradiated burst that created you. Including Mollusk Control.

Most genres get one big initial success and the others following. The fact that Champions and V&V were contemporaneous was, I think, due to distribution. Champions was a west coast thing, while V&V belonged to the east coast and midwest. So long before rap there was a coastal rivalry going on. But while Champions wen through numerous revisions over the year (plunging into MMOs most recently), V&V fell into that ethereal plane was Fantasy Games Unlimited, neither living nor dead. Only recently did the original designers regain control and will be launching a new version.

And I really hope it has Mollusk Control.