Quest of the Ancients. 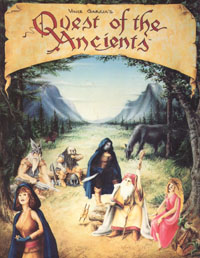 OK, there's not a lot of competition for "Q", but this is actually worth examining.

Quest for the Ancients shows up relatively late in the RPG timeline, but is a great example of the games which feel like they evolve out of house rules and attempts to "fix" D&D.  The fixing continues until enough of the genetics are changed that it feels like a related species, like those pygmy elephants you find on Mediterranean islands (well, you USED to find). There are nine stats, and they are generated by various combinations of dice but still in the area where a character created by 3d6 could be among them. The classes are a grab-bag of Fighter classes (Cossack, Gladiator, Knight, Legionnaire, Rouge, Saracen, Viking, and Woodsman), Tricksters (Assassin, Bard, Cutpurse, and Gypsy), and Spellcasters (Druid, Earth Prist, Necromancer, Sorcerer, and Witch). A core combat system that uses a d30 (other options are, mercifully, presented as well).

And, in the true tradition of D&D-derived RPGs, it has halflings, though not as a main race, but an example (the "furfoots") of a race that the DM can create.  It also has a dedication to Stevie Nicks (the inspiration of the Witch class) and a thank you to yours truly (apparently, from a note I found in the book, for the Sigiltry spell, which sounds like a parallel evolution to the tattoos from Azure Bonds).

It is big, squarebound and a labor of love. As I said, it shows up late in the evolutionary tree, contemporaneous with Nightlife, at time when showing up with a big book full of classes and spells was what you needed to establish yourself with a market tired of the same old D&D.

And looking at it 20 years later, it does not feel horribly dated. Rather, it evokes the spirit of of the current Old School Renaissance that is sweeping through the fields of blogs, DTP and self-publishing. In the wake of the OGL, old predecessors like this one have been forgotten, but this is one of the destinations possible for those games that are currently trying to "re-think" D&D.

Look upon this, old-schoolers, and know that this path has been tread before.

[Update:] Fellow A to Z blogger Tim Branan ALSO wrote about Quest of the Ancients (told you that it was a tough letter). Check out his writeup!
Posted by Jeff_Grubb at 8:47 AM