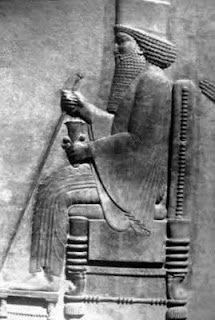 Xerxes is an interesting animal, an Indy domain game set in 480 BC. You are one of the leaders of the city states along the fertile crescent under Xerxes I, also known as King Ahasuerus in the Book of Ester. Like your king, you are a Zoroastran, and your city's divine ahuras appear to you with a warning - a new power is rising in the west, and unless you bind together and launch a major invasion, a boy-king from that land will rip your empire to pieces and its barbarian gods will destroy your pantheons.So you have to work together but still maintain your position in court, dodging your allies assassins while trying to get their forces killed on the battlefield (without letting the Greeks win the war).

OK, I'll fess up. I've got nothing. I have no "X" RPG to cover. I could have done XCrawl, but I was horribly unimpressed with it when I first saw it - not horrible enough to mock, but not good enough to give it its own entry. And I could have done something like the X-men boxed set for MSH or An X-cellent Death pick-a-path book, but that was bending the rules a bit too much. I suppose I could bemoan the lack of an X-Files license.

I was going to say that "X is available for a low monthly fee". The Lovely Bride suggested "Xerxes" as a name, but thought it was about Egyptian gods (which was wrong). I said it was about Greek gods (which was also wrong), but then came up with a story by which it WAS about Greek Gods, and how you could mobilize your city-state against the onslaught of a more vibrant culture.

But just to be clear, there IS no Xerxes. But if you create one, be sure to thank me in the credits, and send me some copies.