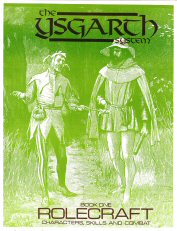 This is one that tests the limits of memory. We had a copy at TSR. and I remember a few things about it, but this is from years ago:

1) It was texturally dense. A lot of type of the page without a lot of white space in the form of margins or leading. If the type wasn't just a courier font, it was darned close.

2) It was mechanically dense. It was part of that "fix D&D by adding more stuff" school that was common at that stage.

3) It was one of the early games to ask for a "character concept" before you start finding out your stats. And here's the part that drive me crazy about character concept. You don't really know what kind of character you really want to create until you understand something about the world and your character's role in it. That works for some genres (You're an investigator who will find out about the Mythos), less well for others. Generic fantasy is one of those where you need a little more information on what your world is like before you decide how you fit into it. So while character concept works as a player retention strategy, it is not so hot as an acquisition strategy.

Other than that, I don't have a lot. From later digging, it has resurfaced a couple times, but has always been a favorite of a small but devoted group. And that may be the fate of a lot of Old School Revival games, but that's not the worst thing in the world.