I didn't really expect to come back to talking about the Tacoma Art Museum so soon, particularly after going on at length about the Norman Rockwell show, but such is the nature of life.

In addition to the Rockwell show, the museum had in one of its smaller galleries a show called "Mighty Tacoma" (through 24 April) which had art (photos and original art) about Tacoma as well. And part of the presentation involved taking pictures in the gallery, the subject seated (and unified) by a pair of oversized red chairs.

OK, it a little cheesy and a little boosterish for the town and the museum and most of the pictures were of smiling, happy people delighted to have their pictures taken at the museum. Nothing wrong with that. Families on a day out, clustered in typical portraiture as taught by innumerable family reunions and Christmas card shots. And there were those who would sit upside down in the chairs, or turn them around and peek over them, but they were in the minority (and the whole bloody lot of them can be seen online here. 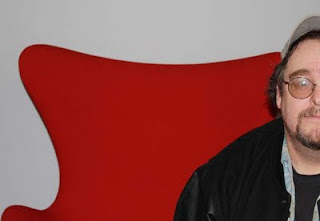 And I thought about it for a moment, and realized that in a lot of pictures I have taken of me, I have little control of my own image. Candid shots are taken at conventions all the time, along with posed photos for others, but usually I am with others, and am just moving where I am told. There are exceptions, like the "Iron chef" shot that I use at the start of the current Grubb Street blog, but that's an indulgence of the cameraman who was supposed to take "real" shots of me for the website.

So I asked the cameraperson at the TAM for something particular, and she accommodated me. I asked for a specific shot, and we did it, and we cropped it to make it exact. And when I got it on the Flickr site, it was uncropped and less effective, so I recropped it for here.

And I have to say, it is a new favorite picture. A picture is worth a thousand words, but only tells half a story (so the average story length should be 2000 words). I like the negative space and the encompassing of the ubiquitous red chair to provide unity. The logo wear and message shirt are not part of the discussion. And I am not smiling for the camera. I am being.

So I made a little art, where a lot of people were just taking pictures.

TAM is also important at the moment since they want to bring the Hide/Seek exhibit to the PNW. This exhibit caused a dust-up when it was shown at the Smithsonian, when a conservative agitated and got one of the pieces pulled, and liberals in turn elevated it to a cause celebre, which raised more awareness on both sides than the show would have gotten if it had simply been presented. So yeah, I'm curious, and would go if they decide to put it one here (and the Keith Haring piece is excellent).