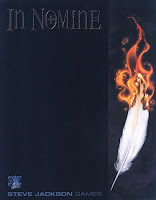 
Looking at my gaming shelves, I seem to have accumulated a lot of these quasi-religious reality-is-not-what-you-think, conflict-in-the-shadows-away-from-the-muggles games during the 80s and 90s. The type where there is a hidden global gnostic war going on and you’re about to be drafted. Kult, Unknown Armies, Noir, and In Nomine. Not to mention the bulk of the Vampire: The Masquerade/World of Darkness oeuvre.
So how does In Nomine rate as an example of this genre? One thing makes it stand out over the others.
The demon of stale bong water. That’s what you really need to know.
That sort of thing (which is part of the reward system in the game – you do better, you don’t get crap areas of responsibility) that takes all the starch out of this type of secret-sacred war. The nature of the war itself has the various members dealing with their own bureaucracies and rules as much as with each other. All in all, it is one of the more real-world takes on celestial combat.
It is one of those "good read" RPGs. The story text plays reinforces the style of gaming, the mechanics are solid but not overblown, and the illos are stylish and a great use of the four-color press.

Fun Bonus Fact: This is a translation of a French game with the family-friendly name In Nomine Satanus. Yeah, that’s a blue-light special at Walmart. And while Steve Jackson Games does mention this in the book, it is on the very last page of text, right before the index. Talk about burying your lede.
More later,
Posted by Jeff_Grubb at 9:31 AM