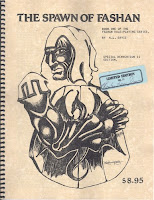 two of the worst games in the history of gaming: Spawn of Fashan and Synnibarr (actually The World of Synnibarr).

The thing to remember with both of these creations is that they were quite obviously labors of love, created, much like Chivalry & Sorcery or Quest of the Ancients, with an eye to "Fixing" D&D, or at least to providing alternatives to it. Yet both went horribly astray, and now are legends in their own time - they are the gaming equivalents of "Manos: the Hands of Fate".

Of Spawn of Fashan, its very rarity has added to its legend. I've seen a copy, though do not own one. The mechanics were complex and as twisted as a web spun by a spider on LSD. I remember is a map that said "North, where Melvin once stood", a highpoint that might once have meant something in an original campaign but merely seems like something out of Bored of the Rings (and became a battle cry among designers for years afterwards).

Oddly, it was a tiny print run, and only attained it true goofy awfulness by way of a review in DRAGON magazine which the reviewer ultimately determined that it was all a cruel joke. Alas, it was not, and the designer tells his tale of woe and intrigue here, many years after the event. Given all the embarrassment suffered, I have a tendency to give Spawn a break - to beat on it is like a merciless review of a straw-hat theater production of Cat on a Hot Tin Roof. 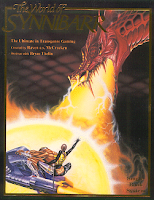 Synnibarr I am less sympathetic towards, as Spawn at least had the virtue of conciseness in its poor showing. Synnibarr was a massive tome created by DTP software and cheap paper rates (I am starting to think that 1991 was a watershed year in game design - a number of games on this list were out that year). It was everything and the kitchen sink, plus several alternate kitchen sinks and a futuristic kitchen sink which is powered by a cloned mammoth from the Flintstones.

The rules were deep and convoluted, but it was the setting that truly set Synnibarr apart in awfulness. The campaign setting was the hollowed-out interior of Mars turned into a starship populated by fantasy creatures, but it went through more changes and dark ages than even Tekumel could stand. And it had the glory of a seventeen-page "example of play" in which the heroes meet in a bar after school, then go off to fight a paradrake, only to be pulled over at the end by the cops, who wish them on their way. (Lemme actually dig this out to double-check -Yep, that's right - makes you want to wash out your mind with lye). The end result was a 494 page testament to excess - it is easy to bad for a couple signatures - such marathon awfulness must be recognized.

But this thing to remember is that these clumsy children were the creations of an act of love, spawned in an era where no one knew what was right and wrong. Nah, we knew, but in Spawn's case there wasn't enough of a support network to warn them off. Synnibarr lacks that excuse.

Good luck finding the old classic Spawn, which lives better as mythology. Synnibarr can be still found at the Half-Price Books, and there may well be still people playing it (we were looking at buying a car from a guy in Bellevue who claimed to be one of the original playtest crew - we bought the car somewhere else). Every genre has its fandom, and every game is someone's first and/or favorite.