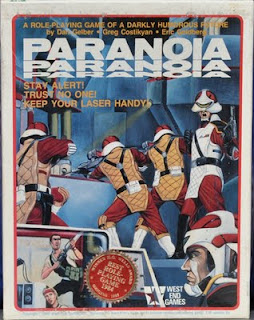 It is the future. You are a living in an underground civilization after something horrible happened outside. You are a Troubleshooter, working for the Computer that controls all parts of your life. The Computer is your Friend.

The Computer, however, is also nutso bananas. You hunt down mutants (oh, by the way, you're a mutant). You hunt down secret societies (oh, by the way, you're in a secret society). You hunt down traitors (everything you do can be considered traitorous). You deal with a color-coded bureaucracy where everyone is desperately, desperately trying to avoid being the next victim of the nutso bananas Computer. You are continually setting up your allies for the fall (and they are measuring you up as a scapegoat as well).

Did I mention this was a comedy?

It's a comedy. An INTENTIONALLY funny RPG that goes after the madness of top-down, nutso banana bureaucracy and conspiracy. Over the Edge deals with some similar issues, but with a more ironic and educated take. A wry smile. They play it straight. Paranoia does it with a cream pie. An exploding cream pie. An exploding cream MUTANT pie. Provided by the Computer. Who hates pie. Pie is treason, citizen.

The mechanics are pretty straightforward, as befits a game where your life expectancy can be measured in hours. Oh, and you get some clones that can sub in for you when you die (and you will). It is pleasantly lethal in its combat resolution, and a simple matter of finding the correct form or opening a door can lead to casualties. The Holloway art is just a big fat bonus, and sets the mood of the game. Also bonus points to the spot illos, which are simply a computer screen with different jokes written for it ("Screaming? I don't hear any screaming.").

This is funny game and a fun game, which is both playable and enjoyable to read. In play, there is often a strange moment with first-time players when it all sinks in. In Call of Cthulhu, it's that moment when you suddenly realize that the old stories about creatures coming down from the stars are real. Here, it is the discovery that your boss IS nutso bananas, and your co-workers ARE willing to throw you under the hoverbus at any moment. And when that moment comes, and the players realize that they're NOT in D&D anymore, they aren't expected to work together to a common goal, and the alignment governors have been removed, THEN the fun begins. I've had a couple sessions that didn't get out of the mission briefing without a TPK (Why yes, you do have clones).

It is an office comedy. With lasers. If it was redone today, they could get the Better Off Ted license for cheap. It was a brilliant take of what you could do with RPGs that wasn't being done with ten-foot-poles and paladins.

[Update:] One of the authors of a later edition of the game sent me a note to the effect that Paranoia remains a on-going concern, and that Mongoose publishing has released a 25th Anniversary edition based on the 2004 edition of the rules. Yeah, it was a surprise to me as well. When I  am going through these, I am not usually dealing with reprints, revisions, expansion, extensions or new editions, and tend to concentrate only on the original versions because, well, they were the ones I played (though the entire subject of such revised versions would be great grist for the blog mill).

Still think if you revise it again, you could get the Better Off Ted license for cheap. I see synergies here.
Posted by Jeff_Grubb at 7:56 AM