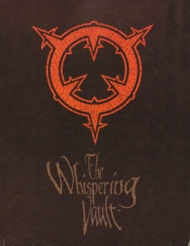 I normally hate games which start out asking me what my "character concept" is, but I really like Whispering Vault. Part of the reason this escapes my wrath is that Lester Smith was GMing the session, but also because WV does an excellent job of portraying its setting, and of telling me what my character's role is in the world.

Why yes, I am going to tell you about my character, but let's talk about the game first.

The Whispering Vault has a high and limited concept. You are a Stalker. In life, you fought against the dark parts of the universe. Now, for all eternity, you are charged with keeping reality (The Realm of the Flesh - yeah, it has a lot of Significant Capitals in the game) intact, seeking out Enigmas that don't belong in the sane world and sending them back to where they came. It's where your Call of Cthulhu investigator is recruited to become an arcane superhero to fight the mythos. And you get super powers, a true (often inhuman) form, and the chance to create your own demiplane or domain. It is a horror game, but one where you get to play the Spectre, the Phantom Stranger, or the Neil Gaiman version of Sandman.

So my character was Angel Ball, a 60s burnout that turned into a spherical smile button with a rainbow mohawk. My domain was San Francisco as drawn by Bob Crumb, and populated by grey corporate minions in grey suits with TVs for heads. Her character when she manifested in the real world was a tough biker. She was a lot fun, and the rules funneled in nicely to let me run with her.

Now what made Whispering Vault cool (Indy game fans may find this familiar) was that it had a definitive format to its story. It was a method of play as stylized and as ritual as an episode of Iron Chef. You would become aware of something wrong in the Realm of Flesh, you would gather the other stalkers, you would summon the Navigator and face the Guardian between the Realms of Flesh and Essence, you would identify and confront the Unbidden and remove the Enigma. You would heal reality. That was a structure right off the bat. No "Well, you hang around in the cyberbar until someone offers you a job" thing. You know your place in the world, you find the threat, you neutralize it. There is a goodly (but not limitless) amount of wiggle room within this plotline. And the fact that it is enjoyable shows that limitless is sometimes overrated.

The game mechanic is a nice tweak on the "roll to hit a target number" mechanic. In this case, you roll a number of dice, and add together the duplicated dice to get your result (if you roll five dice to get a 5,5,4,3,3, you would have a result of 10 from the two fives). You can reroll certain dice. I've called this Yahtzee-style task resolution, and it actually works pretty well.

The version I still have was a single small ringbound booklet, marked only by the symbol, and noted as a "convention advance copy" but what we would call today a Beta version. Later drafts were more in the standard squareback shown in the illo here, but it retained its heart as a beautiful niche product. It could be run for long campaigns, but it excelled at one story at a time, with a group of creative players.