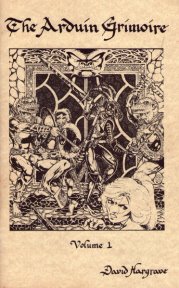 Arduin Grimoire, which was D&D on drugs. Really, really good drugs.
No, seriously. Arduin was sort of the samizdat of early D&D, taking shape in those early, vulnerable years, seeing first publication about 1977. Yeah, we had the little brown booklets, but these were the OTHER little brown booklets. The underground stuff. The homebrew. Stuff that had spells way in excess of 6 or 9. All sorts of bizarre magical items. Spells that turned an opponent painfully (and irrevocable) inside out. Kill Kittens, whose ecology consisted over appearing like a little kitten in the dungeon, then, when you pick it up to cuddle it, drives METAL CLAWS SIX INCHES LONG tipped with FATAL POISON into your flesh.
Did we use these deadly enticements? Not so much. OK, once, maybe twice, before the awful brilliance scoured the walls of the dungeons and left the players bleeding and babbling in the hallways.  But they showed where you could go with this sort of thing.
This was D&D dialed up to 11, delivered as a mosh pit of ideas that kept firing at you through a series of random tables and monsters and options that was screaming and riffing at the time when the rest of us were still mastering the basic chords.
And in 1992 or so, after the passing of the original creative, Dave Hargrave, it was released in a pair of nice, squarebound rules books that made sense and approached it as a playable game, and was very good in its way, but it wasn’t the same as the madness of the original Arduin. Not the same at all.
More later,
Posted by Jeff_Grubb at 8:10 AM